What is ELF/VLF Research?

ELF/VLF stands for Extremely Low Frequency and Very Low Frequency, and refers to the range 300 Hz to 30 kHz. We’re talking about radio waves, like the AM/FM signals you get, just at an even lower frequency.

What is ELF/VLF Research?

ELF/VLF stands for Extremely Low Frequency and Very Low Frequency, and refers to the range 300 Hz to 30 kHz. We’re talking about radio waves, like the AM/FM signals you get, just at an even lower frequency. On our planet, the most potent source of ELF/VLF waves is lightning, so a lot of what we do comes down to studying lightning and its various impacts on our Earth’s environment, detectable even in Antarctica. 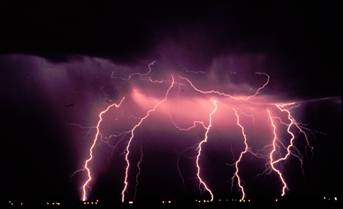 Why are ELF/VLF Waves Useful for Engineers and Scientists?

ELF/VLF waves are useful scientifically because they largely reflect at the D region of the Earth’s ionosphere (60-90 km altitude), and are thus efficiently guided in the Earth-ionosphere waveguide to global distances. For instance, if you set up a radio receiver just about anywhere on Earth, you can pick up short bits of radiation from lightning strikes literally halfway around the world. These are called radio atmospherics, or sferics. ELF/VLF waves also penetrate into seawater, which has led to their use over the past several decades for communication with submerged submarines at long distances.

From a scientific perspective, though, the reflectivity of the D region at these frequencies make ELF/VLF a unique tool for remote sensing of the D region, which responds to a variety of inputs like solar activity, lightning energy, electron precipitation from the radiation belts, cosmic gamma-rays, and earthquakes. Measurements of properties of the D region are extremely difficult, since those altitudes are too high for balloons, yet too low for satellites, so this is a useful ability. Complicating these studies, however, is the fact that the propagation of radio waves in complex media such as the plasma in the Earth’s lower ionosphere is one of the most fundamentally difficult ones in electromagnetism, violating nearly every convenient simplifying assumption like homogeneity, linearity, symmetry, and anisotropy. Numerically modeling these waves is requires the most advanced techniques available. 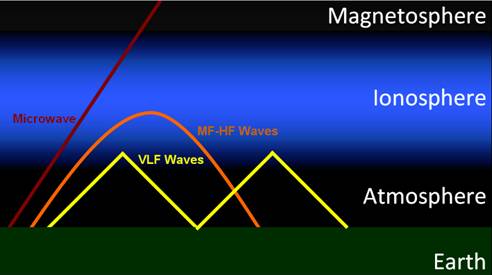 What Are the Practical Benefits of ELF/VLF Research?

Because ELF/VLF waves are guided by both the Earth and the ionosphere, you can send signals around the planet. Lightning does this all the time, but we haven’t mastered it yet because to make ELF/VLF waves with an antenna, you need an antenna comparable to a wavelength. Unfortunately, a 3 kHz have has a 100 km wavelength! The Stanford ELF/VLF group is exploring an alternative method of ELF/VLF wave generation, which utilizes the same currents that make the northern lights, to turn the upper atmosphere into a big radiating antenna. Read about our HAARP program work in Alaska. 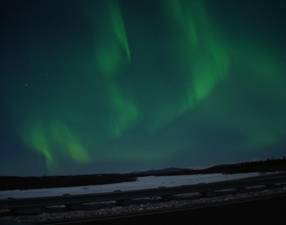 Lightning causes $10B of damage every year (in the USA), kills hundreds worldwide, poses a danger to air traffic, and scares the heck out of you when you’re driving. Understanding the physics of lightning requires advanced simulations. Lightning activity is also expected to go up a lot if global temperature continues to rise. Electric fields associated with lightning and quite difficult to measure, because this would involve putting instruments in the middle of a turbulent thundercloud, so we look at clever ways to remotely sense these fields.

However, because the radio signature (like a fingerprint) of a lightning strike can be detected around the world, receiving ELF/VLF waves allows us to determine the exact location of most lightning strokes on the whole planet, with just a small number of ELF/VLF receivers scattered around. The Stanford ELF/VLF group is a pioneer in developing lightning geolocation technology. Read more about lightning geolocation with VLF.

Any signals going from a satellite to the ground (or vice versa) must pass through the ionosphere. Since the ionosphere (especially the lower part) is rapidly changing, especially at night. ELF/VLF waves give us the only reliable and continuous means of monitoring the lower ionosphere, and thereby, inferring communications outages. For instance, we can monitor ionospheric communication outages from gamma ray bursts from outer space. 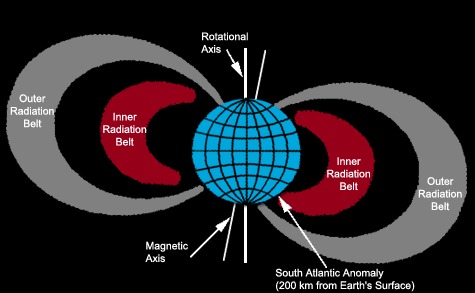 When satellites are launched into space, they are immediately bombarded by a population of energetic charges particles that are trapped by the Earth’s magnetic field, called the Van Allen radiation belts. Over time, these particles can degrade and destroy satellite electronics. In periods of strong solar activity, the number of energetic particles can go through the roof, and stay there for years. ELF/VLF waves from lightning has been shown to be a key driver of the removal of these trapped particles, by propagating as a `whistler’ wave (named for how it sounds in an audio playback) through the magnetosphere, and the Stanford ELF/VLF group is active engaged in understanding how this process works, through experiments and theoretical modeling. Read more about our studies of lightning-induced electron precipitation as observed on the ground, or or in space, or our active experiments to reproduce this effect with VLF radio stations.

Ever seen those beachcombers waving around those metal detectors over the sand to find lost jewelry or other valuables? Turns out, they use VLF. Why? Because VLF waves, unlike MHz and GHz waves, can penetrate into the ground and reflect. ELF/VLF waves may in fact be the most reliable means of subterranean mapping, or detecting underground structures. The Stanford ELF/VLF group is actively exploring how these radio waves interact with the Earth’s surface. Read more about subterranean mapping with ELF/VLF waves. 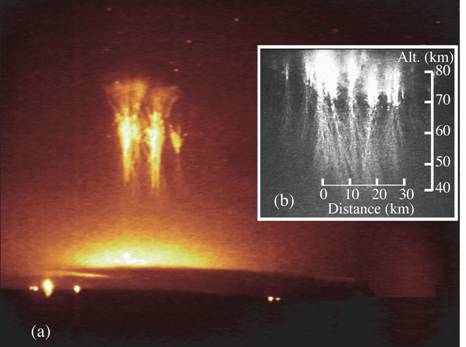 Lightning has broader impacts than just the flash of light and thunder. For instance, certain kinds of lightning can cause a brief discharge tens of miles above the cloud, called sprites, which were predicted in the 1920s but not discovered by scientists until 1989. In fact, some lightning can even accelerate electrons to speeds enormously close the speed of light, producing gamma rays that we usually only see in association with collapsing stars and black holes. The Stanford ELF/VLF group is actively engaged in understanding how lightning impacts out planet’s ionosphere and magnetosphere. Read more about studies of sprites and transient luminous phenomena, and terrestrial gamma-ray flashes.

How did ELF/VLF Research Come About?

The history of ELF/VLF observation dates back to the late 1800’s, when the first telegraph lines were laid down. The first operators reported hearing bizarre sounds that they described as clicks and tweeks, particularly on a day with lightning, which we now know were probably just sferics being picked up by their telegraph line, basically acting like an antenna.

Later, in World War I, soldiers operating communication lines reported hearing strange sounds consisting of a falling tone, sounded like someone was whistling. “You can hear the grenades falling” some used to say. What they were really hearing was an indirect version of lightning energy, known today as whistler, coupling into the communication lines.

Show Me Some “ELF/VLF Data”, Please

The history of ELF/VLF research had its start mostly in audio recordings, since ELF and VLF studies fall in the 300 Hz – 30 kHz, the frequencies range the human ear can recognize. Early ELF/VLF researchers would simply play the signal received by an antenna straight through a speaker. Hence, we can listen to the data stream as if it were audio. Here’s a selected segment of data
taken from Stanford, California. 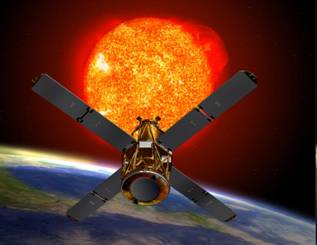 In this file, listen for three distinct types of sounds. The first and most prevalent is a series of clicks and pops. These signals, called “radio atmospherics” are short bursts of radiation originating from lightning strikes, which could be anywhere in the world. Most of the VLF/ELF energy released by lightning is trapped between the Earth and ionosphere, and thus can travel around the world.

The second type signal you’ll hear is a falling pitch, lasting a couple seconds, known for this reason as a “whistler”. Whistlers are also comprised of energy released from lightning, except instead of propagating directly, these signals actually escape the atmosphere entirely, propagate along magnetic field lines and within the radiation belts (causing different frequencies to travel at different speeds), and land at the other end, where they reenter the atmosphere.

In fact, as Stanford researchers pioneered in the 1970s, injection of VLF signals into the magnetosphere can lead to a variety of physical phenomenon in the magnetosphere, when these waves interact with radiation belt particles. Read more about the Siple Station experiment whose data are still being analyzed even 35 years later! Nature itself also spontaneously creates some ELF/VLF energy in the magnetosphere, like chorus waves (again named for its sound if played as an audio file, resembling a chorus of birds).

The third and final noise is a VERY high pitched tone (you may have trouble hearing it, but it is there). You’ll notice a pattern to it – 1,2,3, pause,1,2,3, pause… These are the `Alpha’ navigation beacons operated in Russia, and are an example of a VLF transmitter, which can be used to remotely sense disturbances in the ionosphere.

Another way of presenting VLF data is in the form of a spectrogram, and here is an example of the same data in this form: 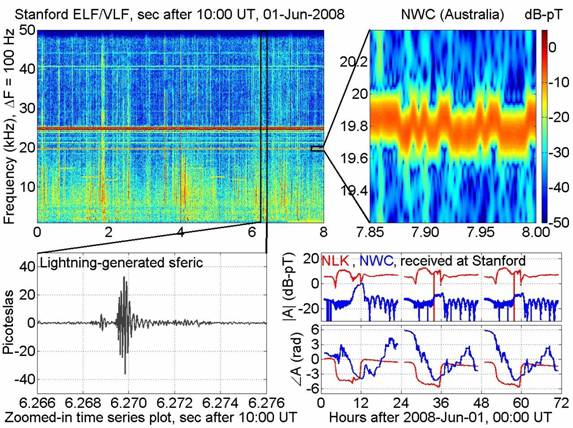 The data are divided up into small time segments, in this case 10 ms long. A Fourier transform is performed on each segment, and the color shows the magnitude of the signal.

The numerous vertical lines on these spectrograms are radio atmospherics, or `sferics’, originating from lightning strikes, which could be anywhere in the world. Lightning emits short bits of impulsive radiation which can observed be at global distances from the source since they are guided by the Earth-ionosphere waveguide. These correspond to the “click” and “tweek” sounds in the audio sample. A zoom-in a radio atmospheric is shown in the bottom left panel.

There are also a set of short horizontal lines between 10 and 15 kHz. These are the `Alpha’ navigation beacons.

The solid horizontal lines between 18 and 30 kHz are VLF transmitter signals, although they are too high in frequency to hear in the audio. These transmitter signals are nominally used for communications. The top right panel shows a zoom-in of a transmitter called NWC, in Australia, which is clearly detected at Stanford, and the communication signal can be seen as up and down modulation of the frequency. However, these transmitter signals act as a diagnostic of the lower ionosphere, since their propagation to long distances is dependent on ionospheric reflection. The bottom right panels shows an example of two of these VLF transmitters tracked at Stanford for a 3-day period. Both the amplitude (top) and phase (bot) of the signal show a clear daily variation, reflecting the drastic changes to the lower ionosphere from daytime to nightime. This is an example of ionospheric remote sensing using VLF transmitter signals.

Where Do You Collect ELF/VLF Data?

We have receivers all over the world, on all seven continents, for a wide variety of experiments. Our network is always growing and changing as our experiments adapt. Our students scrounge the planet for the best spots to plot down another of our radio antennas. 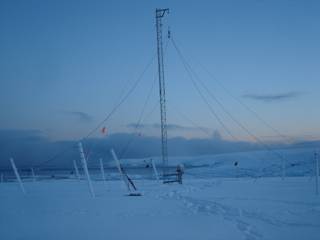 We also design instruments for optical detection of lightning-related phenomena. Our one of a kind research topics require custom built one of a kind instruments, and we are always engaged and designing the latest and greatest electronics systems for our experiments. We deploy instruments in the harshest and most remote environments on Earth, designed with ultra low power so they last without human intervention.

We also build instruments that fly on satellites. We work with other group satellite data, as well (like RPI and IMAGE).