Until recently, it was thought that the dazzling display of light
offered by a thunderstorm was confined to the lightning activity in the
thunderstorm clouds and between the clouds and the ground.

Until recently, it was thought that the dazzling display of light
offered by a thunderstorm was confined to the lightning activity in the
thunderstorm clouds and between the clouds and the ground. This changed in
1989 with the first scientific documentation of a brilliant optical flash well
above a thunderstorm [Franz et al., 1990], following years of intermittent
but persistent verbal reports of such high-altitude flashes by pilots and
others [Vaughan and Vonnegut, 1989, and references therein]. Publication
of the photograph of the flash stoked a great amount of scientific interest in
the subject of lightning-associated high-altitude (above cloud) flashes, and
within a few years a menagerie of different kinds of flashes had been
discovered. The different kinds of flashes were given fanciful names like
“sprites” and “elves” to reflect their fleeting and hard-to-catch nature (and
to steer clear of names suggesting causative mechanisms which had not yet been
pinned down), and the entire category of flashes came to be known as transient
luminous events (TLEs). Examples of various kinds of TLEs are shown in Figure
1.

The VLF Group and TLEs

The VLF Group has been deeply involved in TLE research since the subject’s
scientific inception in 1989, making numerous theoretical contributions and
observational discoveries. Much of the VLF Group’s work has been driven by
in-the-field TLE observation campaigns carried out all over the world with
novel imaging instrumentation developed and built at Stanford. Locations for
these campaigns over the years have included the Rocky Mountain Front Range of
Colorado (looking into the US Great Plains), the Magdalena Mountains of New
Mexico, Arecibo Observatory in Puerto Rico, Pic du Midi in the French Pyrenees,
Japan, and South Africa. 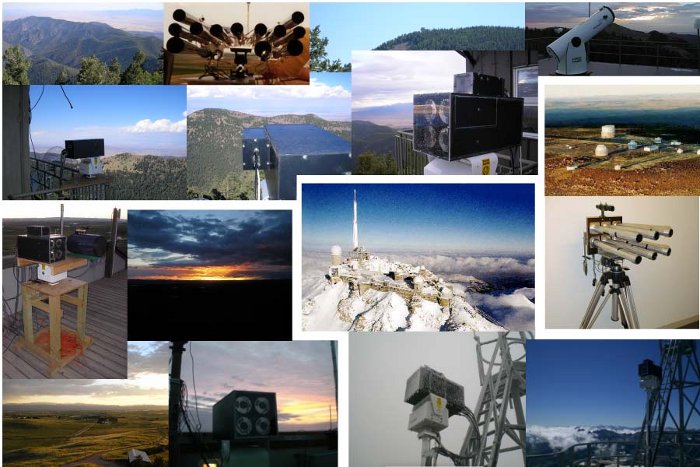 Novel approaches to TLE imaging and imaging instruments developed by the VLF
Group include:

Recent study of TLEs by the VLF Group has been funded by the Office of Naval
Research (ONR).

Portions of this material are based upon work supported by the National Science Foundation under Grant No. ATM-0836326.

Any opinions, findings, and conclusions or recommendations expressed in this material are those of the author(s) and do not necessarily reflect the views of the National Science Foundation.